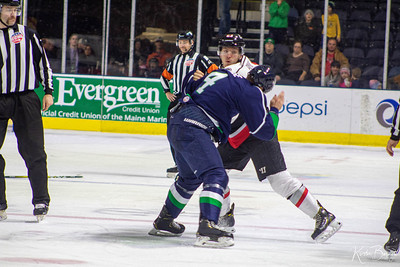 GLENS FALLS, NY – The Adirondack Thunder had a pair of games this past weekend, hosting the Reading Royals Friday for 80s Night before heading to Portland Saturday to face the Maine Mariners for their “Hockey Fights Cancer” night.

GLENS FALLS, N.Y. – The Adirondack Thunder had a pair of games this past weekend, hosting the Reading Royals Friday for 80s Night before heading to Portland Saturday to face the Maine Mariners for their “Hockey Fights Cancer” night.
Forward Matt Salhany opened the scoring at 10:19 of the opening period Friday night.  Hayden Verbeek‘s shot deflected into the air, and the puck came straight to Salhany, who swung his stick as if it were a baseball bat. It was a tubular home run swing, and the Thunder had the lead.
Adirondack netminder Eamon McAdam came up with some gnarly saves in the first period and into the second to keep the Thunder up 1-0.
Royals forward Frank DiChiara tied it up at 7:14 of the second period when he used Thunder defenseman Blake Thompson to deflect the puck into the net.

Thunder head coach Alex Loh on the goal: “There’s always little things here and there.  Their first power play goal goes off one of our guys’ sticks and goes in.”

Shortly after DiChiara’s goal, Thunder rookie Ryan Walker was hauled down on his way to the net and awarded a penalty shot.  Royals goaltender Kirill Ustimenko made the save, and the score remained 1-1.

With 1:35 remaining in the middle frame, Royals forward Pascal Laberge scored a controversial goal to take the lead.  The Thunder argued that the puck never went into the net, but after review, it was determined it hit just inside the crossbar.  That was the second Reading goal to be reviewed Friday night (the first was waved off).
Rookie Max Willman extended Reading’s lead 47 seconds into the third period when he skated through the crease and went around McAdam to put the puck into the net.
The Royals sealed the deal late in the third when Corey Mackin scored with Thunder goaltender McAdam off for an extra attacker.  Adirondack’s Conor Riley got totally burned at the blue line, turning the puck over to Mackin, who put it into the empty net for the 4-1 Reading victory.  That put an end to Adirondack’s not-so-radical retro night (except the music, which continued after the fans vacated the building).

“We’ve gotta beat good teams to do well in this league, especially in our division, everybody’s good, so we just have to make sure we’re on point all the time,” Loh said.

The Thunder then headed to Portland for the Mariners’ “Hockey Fights Cancer” night.
Adirondack rookie Craig Martin was awarded his first pro goal 5:05 into the game.  Martin was planted in front of Maine’s net when he deflected a shot up and over goaltender Connor LaCouvee.  The puck didn’t go into the net until LaCouvee slid backwards, knocking it in and giving the Thunder an early lead. 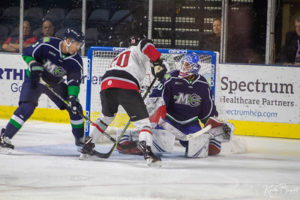 Defenseman Jake Linhart scored his first of the season a little over ten minutes later.  He skated into the Mariners zone with Riley and Mike Szmatula, who took the initial shot.  Linhart picked up the rebound and buried it for the two-goal lead.
Both LaCouvee and Adirondack netminder Evan Cormier made the necessary saves throughout the middle frame, and both teams were held scoreless until 3:32 of the third period, when Walker put the Thunder up 3-0.  Szmatula stole the puck from Mariners defenseman Marc-Olivier Crevier-Morin and got it to Salhany. LaCouvee stopped his shot, but Salhany passed the puck back to Walker for the goal.
Kelly Summers scored Adirondack’s fourth and final goal.  The defenseman received a pass from captain James Henry and skated in towards the crowd in front of LaCouvee to backhand a shot on net.  The puck ping-ponged a bit before Summers regained possession and put it home. 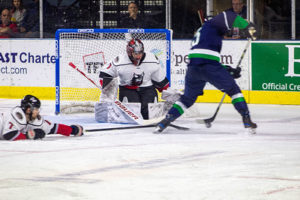 Cormier finished the game with 25 saves for his first ECHL shutout.
The Thunder currently sit in fourth place in the ECHL’s North Division, three points ahead of the Mariners. They next face the Newfoundland Growlers (9-5-0-0) at home on Wednesday before traveling to Canada for a game against the Brampton Beast (9-6-0-0) on Thursday.
Stay caught up with all the news on the Adirondack Thunder, by following @SinBinADK on Twitter. For the latest news on the ECHL and AHL, “like” The Sin Bin on Facebook!

Carrie Roberts covers the Adirondack Thunder for Field Pass Hockey. Follow and interact with her on Twitter @FPHAdkThunder.