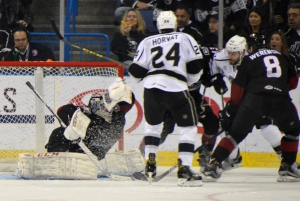 Previews were hard to write for two teams that had never met. They had rarely even played the same teams. You could compare stats, possible playing styles and perhaps special teams performance, but the bottom line was that no one knew until they played each other. Last night, The Ontario Reign met the Lake Erie Monsters for the first time this season.

The Reign came out strong, throwing around their size, trying to get the Monsters off of their game. It is how they play the first game against any opponent and they have had a large amount of success. The Monsters, for their part, weren’t phased, giving as good as they got but not getting frustrated. The Reign brought their possession game to bear with full force in the first period. The Monsters bent, but didn’t break. The teams traded power plays, but neither could score and the period closed with the Reign outshooting the Monsters 16-11 but no score.

Another Reign power play 4 minutes into the second period yielded a goal from Sean Backman, putting the Reign up 1-0. Unfortunately, the Reign then took the rest of the period off. The Monsters turned their possession game against them, limiting the Reign to just seven shots on goal, most of those in the first 4 minutes. They tied the game a mere three minutes after Backman’s goal. Just over a minute later, they took the lead with a power play goal of their own. 1:20 would pass before the Monsters scored yet again. Three goals in under three minutes on five shots and the Reign looked like they hadn’t played in a month. Budaj managed to pull himself back together and the Reign’s defense began to close ranks, but the offense couldn’t get anything going. 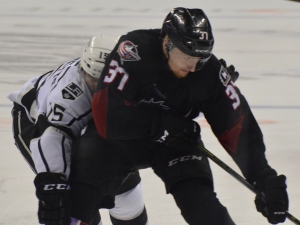 The Reign came into the third finally ready to play again. Nick Dowd cut the Monster’s lead to one goal only 1:38 into the period. Ontario was not able to dominate as they have throughout most of the playoffs, but they weren’t being vastly outplayed anymore. Joel Lowry tied the game mid-way through the period, to the delight of the crowd. Then the Reign surrendered another goal just 19 seconds later. The Reign were not able to mount another comeback and dropped the first game 4-3.

Impressive: The Monsters’ ability to adapt to whatever the Reign threw at them is going to be a key to this series. They managed to completely out play the Reign through the entire second period and parts of the third. 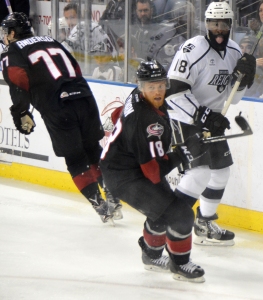 Not So Much: The Reign fell back into bad habits from the last half of the season, taking an entire period off. In the regular season, Budaj was often able to cover for them until they got back in the game. Last night, Budaj was having a bad game of his own. He looked shaky from the start and spit out a few bad rebounds that were saved by his defensemen, until they weren’t there, then it was in the net.

Moving Forward: Ontario must respond with a much better game tonight. To head back to Lake Erie down 2-0 is not impossible, but makes coming back infinitely harder. More than that, the AHL needs a California team to have a good showing outside their division. The five west coast teams have been essentially isolated from the rest of the league and need to prove that it hasn’t been detrimental to the player’s development.