ONTARIO, CA – After a week of wins, the Ontario Reign had managed to claw their way to second place in the division. Just ahead of them in the standings were the Stockton Heat. In town Wednesday night were those same Heat, looking to solidify their place a top the division. The winner of the game would skate away on top with a small buffer to second place.

No one told the Reign it might be an important game. 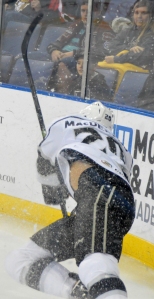 In a disturbing return to bad habits, the Reign came out completely flat. They spent the first five minutes of the game in their own zone chasing Heat players around. The pursuit eventually led to Ontario’s first penalty of the game. For 1:56, the Reign held them off, but the first shot the Heat actually registered on net went in and the Reign went down 1-0. It sparked no fire for Ontario as they continued to chase the play, spending the majority of the period playing defense and just trying to clear the zone. Stockton potted another goal two minutes later to make it 2-0. The Reign managed to hold on to that score for the rest of the period, finally escaping to the break down by only two. 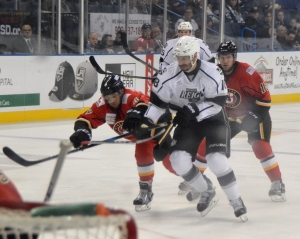 Just 12 seconds into the second period, the Reign were down 3-0 and still hadn’t found their game. It was the Sutter-Amadio-Brodzinski line that finally brought Ontario’s offense to life. After a couple of good shifts in the Heat’s zone, Mike Amadio managed to put one past David Rittich to cut the deficit to 2. The goal finally sparked the Reign and waves of attack finally fell on the Heat’s net. It was negated by a bad bounce that ended up in a rush the other direction and another puck in the back of the Reign’s net. It was now obvious that while the Reign had turned their game around, Campbell was hadn’t followed suit. Stockton would widen their lead to 5-1 with only 1:30 left in the second and the game seemed over.

Man-mountain Jack Flinn was in net for Ontario to start the third and the Reign came out determined. A power play goal by Michael Mersch just under two minutes in gave a small breath of hope to the fans. Another power play goal, this time from Teddy Purcell, cut the lead to 2 and murmurs of hope began to circulate. Rittich and Flinn both locked things down, holding the score at 5-3 for twelve minutes before the Reign broke through again. Now the gap was only one goal with 2:20 left to play. With Flinn on the bench, Ontario threw everything they had at Stockton.

Impressive: In games where your team desperately needs a goal or two, there is often one player who provides hope every time he is on the ice. You feel like the team is just an inch away whenever his line or pairing is out and you wish they never had to leave the ice. Last night it was Michael Mersch and Mike Amadio. Both made whatever line they were on dangerous every shift. Amadio began the Reign’s turn around after the slow start and Mersch joined in shortly thereafter.

Not So Much: Jack Campbell did not have a good night. When the Reign were trying to turn the game around in the second, he could not provide them with the stop they needed to rally behind. He allowed two goals on the first three shots and five goals in 15 shots.

Elsewhere in the Division: San Antonio lost 5-4 to the Milwaukee Admirals Monday night. Except for the Gulls overtime loss to the Reign Tuesday night, the rest of the division has had the week off. With the loss to the Heat, the Reign fell back down to third behind the Roadrunners.