After starting the year on top of the league, the Tucson Roadrunners have fallen down the standings and out of a playoff spot. The Ontario Reign have had the opposite journey, struggling to start then working their way up the standings to third in the division.

The two teams met Saturday night in Ontario for the first in a back to back weekend series. Ontario came home from an overtime loos to the Condors Friday night while the Roadrunners traveled north after a 2-1 loss to the San Diego Gulls.

The first period saw the return of the early season atrocious penalty kill for the Reign, allowing the Roadrunners to go two for two and take the 2-1 lead. A late goal by Zybnek Michalek gave Tucson the 3-1 lead at the end of the first. 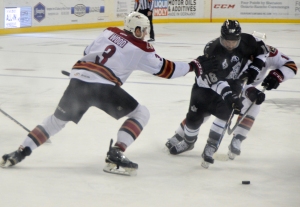 The Reign came out firing in the second, but Marek Langhamer was in the zone. Despite out-shooting the Roadrunners 15-4, the Reign could only get one puck in the net which was offset by another Roadrunner goal four minutes later.

Ontario turned it up one more notch in the third period, firing 22 shots at Langhamer, who stopped all but two. San Herr notched the first goal, firing the puck past Langhamer who was sure he made the save until he heard the crowd and the goal horn. The goal brought the Reign within one, but that only lasted a couple of minutes as Grayson Downing regained the two goal lead. With Jeff Zatkoff on the bench, Vincent LoVerde managed to cut the deficit to one again, but Ontario ran out of time and Tucson earned the 5-4 win.

Impressive: After a small warm up period, Jonny Brodzinski was right back to his old self, looking dangerous and assisting on Patrick Bjorkstrand’s goal in the second. Despite being a Roadrunner, we have to mention Langhamer’s performance. He stopped 50 of 54 shots that the Reign sent his way, holding on to earn his team the win. 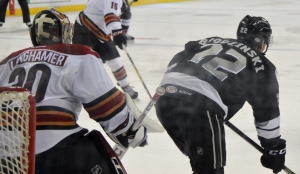 Not So Much: The Reign’s penalty kill took a major step back, going two for four and not looking good doing it. Zatkoff had a bad night in net, saving 23 of 28 shots and looking shaky with each save.

Elsewhere in the Division: There has been quite a few changes since we last updated divisional happenings. The most notable would be the ascension of the San Jose Barracuda. At one point sporting an 18 game win streak, they’ve climbed atop both the division and the entire league with a 0.717 points percentage. The Barracuda hosted the Grand Rapid Griffins last night and the two teams stalemated each other, taking a 0-0 score to the shootout. the Barracuda eventually earned the second point in the 1-0 win. Following them up the standings with an almost as impressive run are the San Diego Gulls. They had the night off after beating the Roadrunners, but these two power houses will meet again this afternoon. Fighting for fourth place and the final playoff spot are the Stockton Heat and the Bakersfield Condors (following their parent club’s example by being relevant for the first time in years). The Heat took the game 3-2 to force Tucson to sixth place and close the gap on the Condors. Currently out of the playoff picture, the Texas Stars suffered another loss, this time to the Iowa Wild at home. Trudging through a 12 game winless streak, the San Antonio Rampage had the night off.

Despite Stumble, Postseason in Reach for Mayhem