ONTARIO, CA – Facing elimination in four games, the Barracuda were expected to come out on fire. And they did. For the first half of the first period, they were looking dangerous. They had chances and a few really close calls. A fight between Paul Bissonnette and Alex Gallant just two minutes in set the tone for the rest of the game: hard hitting with no checks pulled.

It was Nic Dowd who drew first blood, putting the Reign up 1-0 mid-way through the first period. After surviving sustained offensive pressure from the Barracuda, the Reign  managed to set up in the Barracuda’s zone. A point shot from Gravel bounced back to Backman for a shot that rebounded over to Dowd who lifted it past Aaron Dell.

San Jose didn’t give up, even though the Reign rarely let them through the neutral zone. Ten minutes into the second, they were rewarded with a goal of their own to tie the game. It was on odd shot off of the half boards with not much of a screen in front of Peter Budaj, but it counted for Jeremy Langlois. The lead was short lived as three minutes later, Justin Auger dug a puck out of the crease where Dell had not managed to cover it. Skating out to gain some distance, he fired it over Dell’s shoulder for the 2-1 lead.

San Jose pressed harder, but Budaj turned them away despite some really close calls. With only 4:30 remaining in the game, Jordan Samuels-Thomas delivered the killing blow. After chipping the puck loose from San Jose, he followed Auger into the Barracuda’s zone where Auger had it poke-checked off of his stick by Karl Stollery. Unfortunately for Stollery, that left the puck in perfect position for Samuels-Thomas who snapped it past Dell, much to the delight of Budaj at the other end of the ice.

The lemon juice in the cut was the empty net goal by Andrew Crescenzi exactly three minutes later. The Reign eliminated the Barracuda with a final score of 4-1. 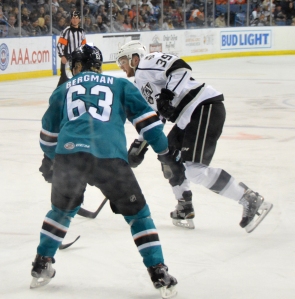 Impressive: The third line of Auger-Crescenzi-Samuels-Thomas were the stars of the night, registering three of the four Reign goals. Despite only seeing 19 shots, Budaj made some great saves to keep the Barracuda to one goal.

Not So Much: The Barracuda were outmatched through the entire series. At no point in the series did they have control of any game. Their single win came off of an amazing performance by Aaron Dell.

Moving On: The Gulls eliminated the Stars last night with another dominating 6 goal game. The battle of Southern California is set to begin on Thursday, May 5th at the CBBA in Ontario. In a new twist on the home game format, the series will switch venues for every game. We will have our preview up in a couple of days. Spoiler alert – it isn’t pretty for the Reign.

Elsewhere in the Playoffs: There is only one first round series still undecided. The Hershey Bears are facing elimination against the Portland Pirates later on today. The winner will take on the Wilkes-Barre/Scranton Penguins.