ONTARIO, CA – We’ve been dark for almost a month now due to illness, but we’re back online and paying attention to the Reign again. 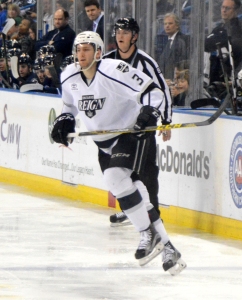 When we went dark, the Reign were in the middle of a three-game losing streak (it’s a bad streak to Reign fans). They returned to their winning ways by drubbing out the Heat 6-1, taking down the Texas Stars three times in a row with a small break to clip the Gulls wings, and shutting down the Rampage in San Antonio twice.

Last Saturday, they were back at home against the Gulls for what started out as a rough match between rivals but quickly devolved into the Khudobin show. The Gulls scored 4 minutes into the game then sat back as the Reign threw everything they had at them. Despite being outshot, out-possessed, out-worked and out-penalized, they held on to that one goal lead until mid-way through the third when Kempe was able to tie it up. The 1-1 tie lasted through the rest of regulation and most of overtime until the Gulls finally sealed the win with 1:18 left. 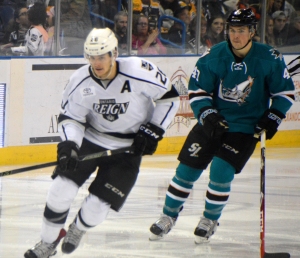 The next day saw the Reign up in San Jose for a 4-1 domination of the Barracuda. Wednesday they were at it in San Jose again. This time the Barracuda were ready to play while the Reign seemed to still be on the beach. The Reign did not register a shot on goal for most of the first period and let the Barracuda dictate the game to them. They started playing better in the second period, managing to tie the game on the power play. Another power play goal mid-way through the third put them up 2-1, but the Barracuda were able to tie it up again with the netminder pulled. It only took 23 seconds of overtime for Mersch to tally the Reign’s game winning goal.

Usually we would to an impressive & not so much section here, but so much has gone on that nearly every player has cycled through an impressive streak.

We will note that the Reign seem to adopting a bad habit of slow starts or backing off with a lead. Their win streak over the Rampage included a game where they went up 2-0 then took their foot off the gas, pulled over and grabbed some coffee. The Rampage posted 4 unanswered goals and it would have been a Rampage victory if not for a series that saw three goals in 1:45 to put the Reign up 5-4.

The Playoff Picture: The Reign have a firm hold on first in the division and conference. The Gulls and the Stars are still squabling over second place, but both seem to be headed for the playoffs as well. Fourth place in the division currently belongs to the Barracuda and barring a win streak by the Condors, will be theirs. It does not guarantee a playoff spot, however, as the Charlotte Checkers are currently ahead of them in win percentage and could steal the spot. If that happens, the Reign will play the Checkers in the first round while the Gulls take on the Stars.

Has Coaching Changed How the Marlies Play?