It was what coach Steve Martinson described as a “meat and potatoes” practice yesterday as the Allen Americans prepare for two games against the Kansas City Mavericks. Not a real strenuous practice because conserving energy is important with the Americans playing four games in the next five days. Some drills that reinforce mistakes made in the last couple of games, some special teams work and some individual instruction bringing players up to speed.

– Kansas City drove to Allen overnight after playing at home on Sunday when they lost in a shootout to Colorado. The Mavericks had the day off in Allen yesterday.

– A Tuesday night home game is an odd duck for sure, you have to go back to November 2015 for the last time Allen played at home on a Tuesday night. The only other game in the ECHL tonight is Tulsa at Wichita. It is kind of nostalgic to have the only action in the ECHL among the “four band of brothers” (Americans, Mavericks, Oilers, Thunder) who have fought tooth and nail against each other for years. Familiarity breeds contempt and over the years these four teams have played well over half of their games against each other.

– Allen will have their strongest lineup since opening night on the ice tonight. Fans will get their first chance to see Olivier Archambault at home after his long stint in San Jose. Keep an eye on #44 when he has the puck to see some amazing skill. Zach Hall is expected to be back in the lineup as is Alex Guptill who was recently acquired in a trade with Rapid City. There will be speed, skill, and toughness on every line and that depth is very hard to defend.

– Here is how Allen and Kansas City match up:

–  Here is how Allen and Kansas City rank in the ECHL in some statistical categories:

– Another stat to keep an eye on tonight as a key to success is shots on goal. Allen is ranked #24 in the league giving up an average of 36.42 shots per game. In the first two games against Kansas City, the Americans were out shot 82-47. Even though Allen has a decent record when being out shot by their opponent (6-5-1-1) getting out shot by almost 18 shots per game is not the formula for success.

– Coach Martinson typically gives each goalie a start in back to games and if I had to guess Brodeur would get the start tonight and Williams tomorrow night. Giving Williams an extra day after coming back from an injury makes sense.

– If you look at Jeremy Brodeur‘s stats it is easy to see the impact of Allen allowing so many shots on goal. Brodeur is making over 40 saves per game and has the third best save percentage in the ECHL at .930. But even with a great save percentage, his GAA is ranked #19 in the league (2.82) because he faces so many shots.

– Mavericks top goalie, Tyler Parsons, was injured in Kansas City’s game against Colorado on Saturday. He did not make the trip with the team to Allen.

– The player to watch for Kansas City tonight is #7, Mike McMurtry. He is tied for fourth in scoring in the ECHL with 31 points (14 goals 17 assists). McMurtry leads the Mavericks in points, goals, assists, and game winning goals. He has 31 points, the next highest on the team has 18. His 14 goals are six more than anyone else on the team. McMurtry has multiple points in four of the Mavericks last seven games, has a goal in five of the last seven games and failed to get a point only once. If you like to follow the game within the game track what defensive pairing and forwards coach Martinson uses against McMurtry since the Americans have last change at home.

– Here is a story written by fellow Team Sin Bin writer Joe Rozycki that talks about all things Kansas City Mavericks. Some good background on the Mavericks season thus far and what lies ahead: https://thesinbin.net/seven-defining-moments-staring-the-mavericks-in-the-face

The referee scheduled for the game is Mike Sheehan (#11) and the linesmen are Aaron Schacht (#31) and Brian Bull (#95). Sheehan typically does not call a lot of penalties. He was the referee when these teams played in Kansas City 10 days ago and called only five penalties. Only two of the five were minor penalties resulting in a power play. The Mavericks were 0-2 on the power play and the Americans didn’t have a power play opportunity in the game.

– Congrats to Brandon Cox who was the winner of four upper level loge tickets for the game tonight in the Barry the Blogger drawing. Thanks to everyone who entered and stay tuned for more free tickets next month.

– The best home record in the ECHL belongs to the Colorado Eagles at 12-1-2-0. The best road record goes to the Florida Everblades who are 10-0-1-1 on the road. Colorado and Florida are the only teams in the league with over 40 points. They are tied atop the league standings with 41 points.

– The Allen Americans will be wearing their ugly Christmas sweater jerseys on Saturday (December 23) and they are already available for bidding at the online auction site. The auction ends Saturday evening. The starting bid for the jerseys varies from $249 to $299. You can check out the auction at https://one.bidpal.net/goamericans 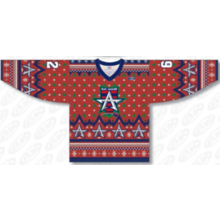 DID YOU KNOW: I have had several questions recently why the Allen Americans will be playing at home on the same day as the ECHL All-Star game which is January 15. There are actually three regular season games that day which is MLK day. Tulsa is at Allen, Florida is at Atlanta and Rapid City is at Utah. Thanks to Joe Babik, ECHL Director of Communications for providing the answer to the questions:

“The All-Star game proposals submitted by Indy (2018 All-Star Game) and Toledo (2019) proposed playing the game on the afternoon of Martin Luther King Day in the hopes of attracting a larger crowd than the traditional Wednesday evening game. Both of the proposals were approved by the Board of Governors (BOG). As part of the approval, the BOG voted to continue to allow regular season games to be played on MLK Day, with the understanding that teams that play that day (and potentially on Sunday based on travel considerations) would send their all-star selection to the game, and as such, they would not be available for the regular season game. All teams were aware of this situation throughout the scheduling process for the 2017-18 season.”