With Allen hosting the Stingrays in game 7 Sunday to determine the Kelly Cup Champion, the debate about the strength of the Central division has surfaced once again. There are two main claims that Central doubters make: that Allen had an easier path to the Finals, and that Allen had fewer callups, injuries, etc to deal with than other non-Central teams (due to perceived differences in affiliations and physical play, I guess). With just one game left to play, we now have lots of stats that might tell us if these things are actually true. Let’s take a look.

First, how Central teams did against teams outside their division:

Unfortunately, the last place and 2nd to last place teams represented the Central in these games way more than any of the other teams. The Beast and Mavs played 25 non-divison games, the other five teams combined only played 15. In addition, those top five Central teams played 10 of these 16 non-division games on the road. All eight of Allen’s and Tulsa’s games were on the road. In spite of that, those top five teams held their own, going 7-8-1-0. Four of these wins came on the road against some of the top ECHL teams, too: Toledo, Florida, Fort Wayne, and Ontario. I’d argue that five Central teams were pretty darn competitive with teams outside the division, while the two that played most of the games were not. So what does that mean? I don’t know if it says much of anything. It just shows a majority of Central teams were not dominated outside the division in the way a lot of people seem to think.

However, if you are trying to use “less roster turnover” as a knock against Allen’s playoff run, you need to take a closer look. Allen had more transactions and AHL callups during the season than all four of their playoff opponents. In fact, Ontario had the fewest number of transactions in the entire league. South Carolina was 3rd to last.

These tables show where I got that information from. The left table is a count of all transactions of any kind that happened after opening night. The chart on the right is a count of any time a player was deleted from an ECHL roster in favor of an AHL roster during the season. Central division teams are highlighted in yellow: 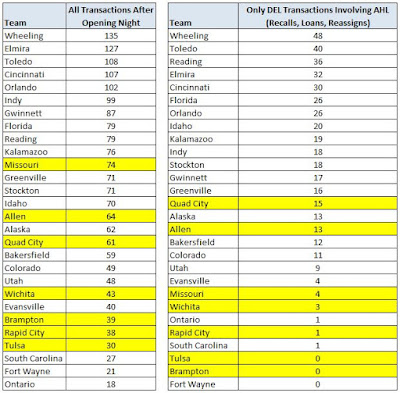 What does this mean? Again, I don’t think it means a whole lot. Like I said, I’m not convinced the number of transactions and call ups mean much by themselves. For example, Toledo is a team that had very high roster turnover and lots of callups, but still ended up with the top seed. More than anything I do think it shows there are different ways to win, and also that affiliations are used very differently by different teams.

Trois-Rivières ECHL Franchise: What We Know