Don’t say goodbye, cause I don’t want to hear those words tonight.

Cause maybe it’s not the end for you and I.

And although we knew, this time would come for me and you… 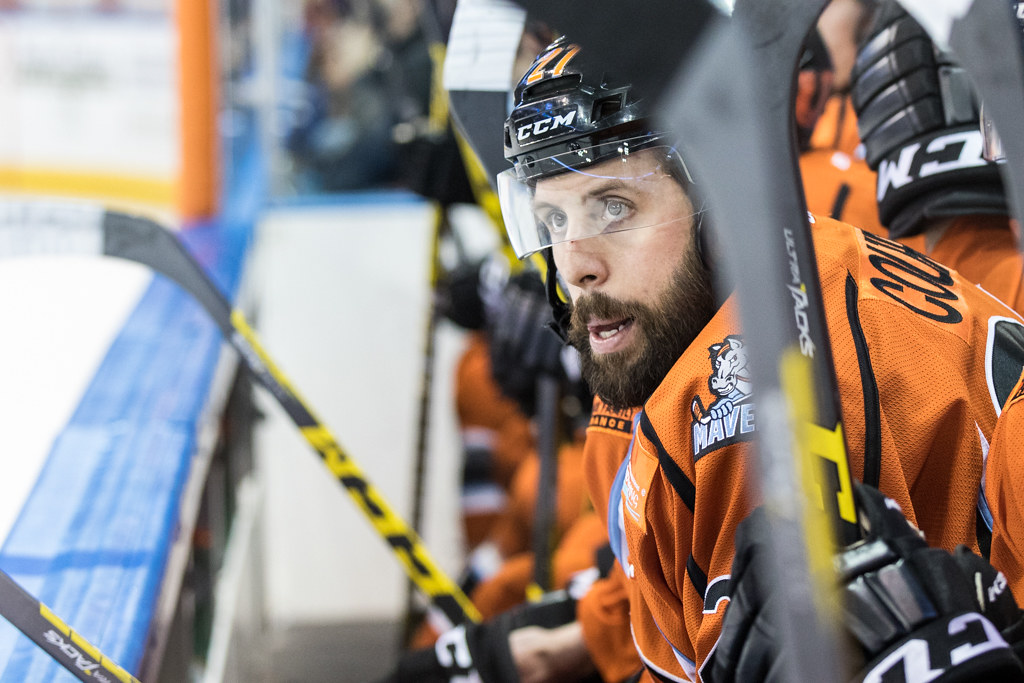 I have a confession to make…Andrew Courtney is my favorite hockey player. No, not just my favorite Mavericks hockey player; my favorite hockey player…ever. Another confession is that in over a year that I have been writing for The Sin Bin, I have never sat down and chatted with Andrew. Maybe it’s fear that my awe of him would overshadow my professionalism as a journalist; maybe it’s just that I wanted to let his play on the ice and the way I watched him interact with fans off the ice tell the story without me getting in the way with a bunch of questions he’s answered hundreds of times before. I’ve learned that sometimes in journalism it’s better to just be quiet and watch what’s happening around you than to muddy it up with a line of questioning. Final confession is that I never wanted to write this story. I never wanted to say goodbye to my hero.

It’s a day that I knew in the back of my mind was coming and probably sooner rather than later. To be honest, a bunch of us somewhat assumed we had probably watched his last game at the end of last season. Then came the announcement that not only was he coming back, but that he would finally wear the coveted “C” on his jersey as did his good friend Sebastien Thinel, as well as Carlyle Lewis, Trevor Ludwig, and Tyler Fleck had previously.  There was joy in the Orange Army as our prodigal son was given the honor that he richly deserved.

I remember the first few times I watched Courtney play. A few shifts proved to most anyone with a little hockey knowledge that there would be no skating instructional videos made for #28 (Andrew’s number when he first arrived towards the end of season 2), but the kid put himself in great scoring position and had a sniper’s accuracy with that wrist shot. March 20,

March 20, 2011 would prove to be a defining moment for, not only Andrew, but for the Mavericks. On that evening, the baby-faced kid from Ontario would score his first professional goal…and his second…and his third. Post-game he would grab an orange Mavericks cowboy hat and take his victory lap in front of an adoring crowd; bowing as he exited through the tunnel. The Mavericks had their guy.

As the years progressed, we watched Andrew grow up in front of our eyes. As his body bulked up and he grew into his role as a top-line winger for the Mavs, he never lost that bright smile we came to know and love. It was evident, even this year despite all the injuries, that there was still a passion for this game and a passion for leading this team. Hockey is funny like that, you don’t just take the pads and skates off and walk away. Hockey consumes you, becomes part of who you are, defines you, and impassions you. When you’re not playing it, you’re thinking about it. When you’re playing it, you can’t think about anything else. With each pop of bubble gum, Andrew Courtney has embodied that passion we all have for this sport and he was “our” guy. So, what made Andrew Courtney so special? He did amazing things on the ice, as he is sitting first or second in most every offensive category that means anything. However, it’s so much more than that. Courtney is a guy that we can all relate to regardless of whether you were at your first hockey game or you’ve been around the game your whole life. He was never the best skater on the ice and in recent years wasn’t the best scorer on the ice at times. But, it was the never give up, leave it all on the ice, team first mentality that Courtney will most be remembered for by fans of all ages. His motor never stopped running and it didn’t matter if the Mavs were up one goal or down five; the effort from #27 was always there. He was blue-collar to the core and that made him relatable to fans in this area.

For all that he did on the ice for the Mavericks, which by itself should be enough to raise the #27 to the rafters of the Silverstein Eye Centers Arena, he embodied the beautiful relationship that players can have with fans. I swear that Courtney made it a mission that not one kid that ever came to a Mavericks practice didn’t leave without a puck tossed over the glass. Want it signed? Meet him by the tunnel after practice and he’d make sure it had that familiar scrawl across it in silver marker. In fact, I’d be interested to see a list of Courtney’s most interesting things he’s signed over the years. I’m sure there are some “eclectic” things on that list. Sitting on the glass at a game? Watch for the cross-eyed smiling face of #27 to get a kid to smile and wave at their hero.  It’s the beauty of minor league sports that we have the opportunity to get to know these players as people and not just uniformed players skating around a frozen pond and Courtney was the best at it. He endeared himself to an incredible fan base and they loved him right back.

Years from now, we’ll still be sitting around at Mavericks games and starting stories with, “Hey, remember the time Andrew Courtney did _______?” We will remember, and smile, laugh, and think of the incredible enjoyment we got from watching #27 skate this pond.

Andrew Courtney was a man of habit; some might call it superstition. There’s the familiar spray of snow on unsuspecting students preparing to sing the national anthem, the constant popping of bubble gum, and the rink-length shot after every single player has left the ice at the end of warmups.  Last year, when the Mavericks were in the playoffs, Courtney was prepping for his rink-length shot and the opposing players knew it was coming. They pulled their goal off the moorings and turned it around so Andrew couldn’t shoot it in. They exited the ice staring at Courtney as he smiled back at them. He turns and rips a shot down the ice, banked it off the far boards and into the goal. That’s our Courts.

The most impactful moment I’ll remember, though, is at the end of each period when #27 stood at the door to exit the rink and would turn to James McGinnis and flash the sign for love to his friend who has overcome so much. As much as Andrew is James’ hero, James is Andrew’s. They share a bond of brotherhood that is hard to define, but not hard to love. The symbolic nature of that gesture was to never give up, keep fighting and good things will happen. That’s James McGinnis in a nut shell and that’s also Andrew Courtney.

He has been the face of this Mavericks franchise as many others have come and gone. We will, more than likely, never see a Maverick with the tenure of Andrew Courtney again. The game has changed so much and players come and players go. Yet, through all of that, ol’ 27 was still strapping on the skates and taping another twig to go to war for the orange and black. He was one of the few players to successfully transition from the defunct Central Hockey League to the ECHL. His game has changed since that transition as he became a lethal guided missile annihilating anything in his path on that third line. He still found a way to set the Mavericks single-season scoring record and even last year recorded over 20 goals.

I will not say goodbye. I can’t do it. I don’t even know how. How does a goodbye to a person that has created so many great memories look? What do I write? I’m not even sure I’ve given myself time to fully comprehend what this will look like moving forward. So, I can’t say it. My heart simply won’t let me.  You don’t say goodbye to heroes because heroes never die. They live on in your memories. We’ve watched our hero grow up into a man that we could all strive to be. We made Kansas City home for him and his family. We embraced him and welcomed him into our lives and we’re all better for it.  I will choose to say see you around, as I’m sure Andrew will find his way to the SECA a time or two in the years to come.

I will speak for the Orange Army and say thank you, Andrew, for being our hero. Thank you for providing the defining moments in the Mavericks franchise history. Thank you for leading our boys to some incredible wins and keeping your chin up when we suffered our worst defeats. You have bled orange for each of us and given each of us memories we shall never forget. We all know you will be an incredible father and you and Kara have the support of an entire Orange Army moving forward. Your legend will live in our hearts and minds, and while it will never be the same, it was one heck of a ride while it lasted. You are going out on top, as our captain. We’ll keep supporting our boys and you’ve always got a spot in the Army with us. Heck, the 110 Mafia will probably find you a seat over there and we’ll get you hooked up with a sweet cowbell. Don’t be a stranger. Once a Maverick, always a Maverick.