ONTARIO, CA – It’s coming down to the wire in the AHL for that last playoff spot in the west. With three teams vying for the position, the Bakersfield Condors had an opportunity to take the lead while the San Jose Barracuda and Charlotte Checkers were idle last night.

Budaj shut down that dream.

The Ontario Reign had a better start to the game, controlling the pace of the game and the puck for large portions of the opening period. Their hard work paid off with a goal from Joel Lowry (just his second of the season) with help from Andrew Crescenzi. Just 28 seconds later, the new top line of Michael Mersch-Jonny Brodzinski-Brett Sutter chipped in a goal to make it 2-0 Reign. Ryan Horvat would make it 3-0 mid-way through the first, deflecting a Kevin Raine shot past Condors’ goaltender Niklas Lundstrom. Then the Reign once again laid back while the Condors fired up their offense.

A goal from Josh Currie gave the Condors life & they took control of the game. The Reign escaped the first period up 3-1, but the Condors were back at it in the second. Unfortunately for the Condors, a puck thrown at the crease by Justin Auger deflected off of Lundstrom’s stick and into the net, putting the Reign up 4-1.

Bakersfield did not back down and hockey gods were not going to let that pass. The Condors were gifted with a goal near the end of the period after a puck deflected into the air then came down on Budaj’s back and rolled into the net. Despite throwing 17 shots at the net, the Condors were unable to put any more past Budaj and the second closed with the Reign up 4-2. 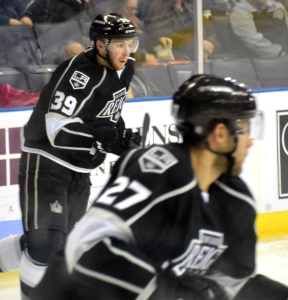 The third period showcased a driven Condors team as they threw everything they had at the Reign, outshooting the Reign 15-5 in the final stanza. Budaj was up to the task, however, and Bakersfield was unable to score again. An empty net goal from Sean Backman sealed the deal and the Reign took the game 5-2.

Impressive: Ontario fixed it’s slow start problem and was rewarded with two early goals. The lower lines were once again able to contribute to the win, picking up the slack from the upper lines.

Not So Much: At this point, the Reign’s power play is almost laughable. They have better chances when shorthanded.

The Playoff Picture: The win brought the Reign closer to clinching a playoff spot, reducing their magic number down to 3. They are the team closest to clinching a spot in the league currently.

The loss hurt the Condors as they fell further behind the Barracuda and Checkers. Charlotte is in Chicago tonight, looking to retake that last playoff spot from San Jose. With both San Diego and Texas inactive, their respective positions remain unchanged.