As weird as it was in Tulsa last night you might have thought is was a full moon rather than a tornado warning as the Allen Americans defeated the Tulsa Oilers by a score of 3-1 before 4508 fans who braved the severe storms to attend the game. How weird was the game? To start with the game was delayed an hour because of a tornado warning as everyone was evacuated to the lower level of the BOK Center. The game itself started out with a shorthanded goal, then there was a scoreboard malfunction, a controversial goal because a player might have been let out of the penalty box early, and a goal that bounced off the goalie and a player’s visor into the net.

At the end of the night Allen had beaten Tulsa for the second straight game and won three games in a row for the first time since January 19.

Spencer Asuchak got things rolling for Allen in the first period with what has become a specialty for him, the shorthanded goal. Spencer led the CHL in shorthanded goal last year and last night got his second in the 20 games he has played for Allen this year. Asuchak took the puck away from the Tulsa defenseman, skated in all alone and snapped a a shot past the goalie on the blocker side. It was his ninth goal of the season.

Greger Hanson got his 23rd goal of the season in the second period to make the score 2-0. Newly assigned forward Vincent Arseneau came out of the penalty box, raced down the wing, got the puck off the backboards and centered a pass to Hanson who put it in the net. This all took place when the scoreboard was not working and the Tulsa coach and players protested Arseneau was let out of the penalty box early but the referee ruled it was a good goal.

Tulsa scored late in the second period to close the gap to 2-1 but could not score again. Allen got an insurance goal in the third period on another strange play. Patrik Valcak sent the puck toward the Tulsa crease where it deflected off Oiler goalie Kevin Carr and then bounced off the visor of Garrett Clarke into the goal. Clarke got credit for his third goal of the season.

J.P. Anderson replaced Riley Gill in goal for the third period and given the fact the game was close (2-1) you would assume Gill sustained and injury that caused the switch. Hope it is nothing serious.

– It was nice to get a win tonight. It is always frustrating to spend so much time traveling for just one game if you don’t come away with a win. This makes the trip worthwhile. With three wins in a row it is great to be back on a little winning streak.

– We played a solid defensive game tonight and that is how we will have to play as we head into the playoffs.

– Our penalty kill was great going 5-5 but our power play was weak going 0-4.

– Both goalies played well tonight which it what we need if we are to make a run here at the end of the season.

– We had some injuries tonight and will have to see what we have when we get home.

– Goal scorers get goals because they take shots and last night was a perfect example. Asuchak and Hanson each had a goal as they combined for 16 of the 27 shots Allen had in the game.

– Speaking of Steffes, he played his first game for Milwaukee (AHL) last night as the Admirals lost to San Antonio in a shoot out after having a 3-0 lead going into the third period. Saw a report that Gary got a lot of ice time, had three good shots on goal, and had a goal disallowed because of a player in the crease. Milwaukee’s next game is Friday at home against Chicago.

– South Carolina extended their winning streak to 22 games last night with a 4-3 shootout win over Cincinnati. It was the second game in a row the Stingrays have won in a shootout with both coming against Cincinnati. Last night South Carolina tied the score with 70 seconds remaining in regulation and won the game in the eight round of the shootout.

– Jack Combs, who was waived by Missouri on Tuesday, has been claimed by Cincinnati.  Have had several questions about how the waiver process works so here is the short version of the process. When a player goes on waivers, teams have until 3:00 p.m. ET the following day to submit a claim. The waiver claim order is based on reverse order of percentage points (i.e., the team with the lowest points percentage has first priority and the team with the highest points percentage has 28th priority). The order is updated each Monday, however, if a team successfully submits a claim during the week, they slide to the back of the order until the order is reset the next Monday.

– April 3rd is Military Appreciation Night and the Americans will be wearing a specialty jersey that will be auctioned off after the game. Here is a mock up of the jersey. 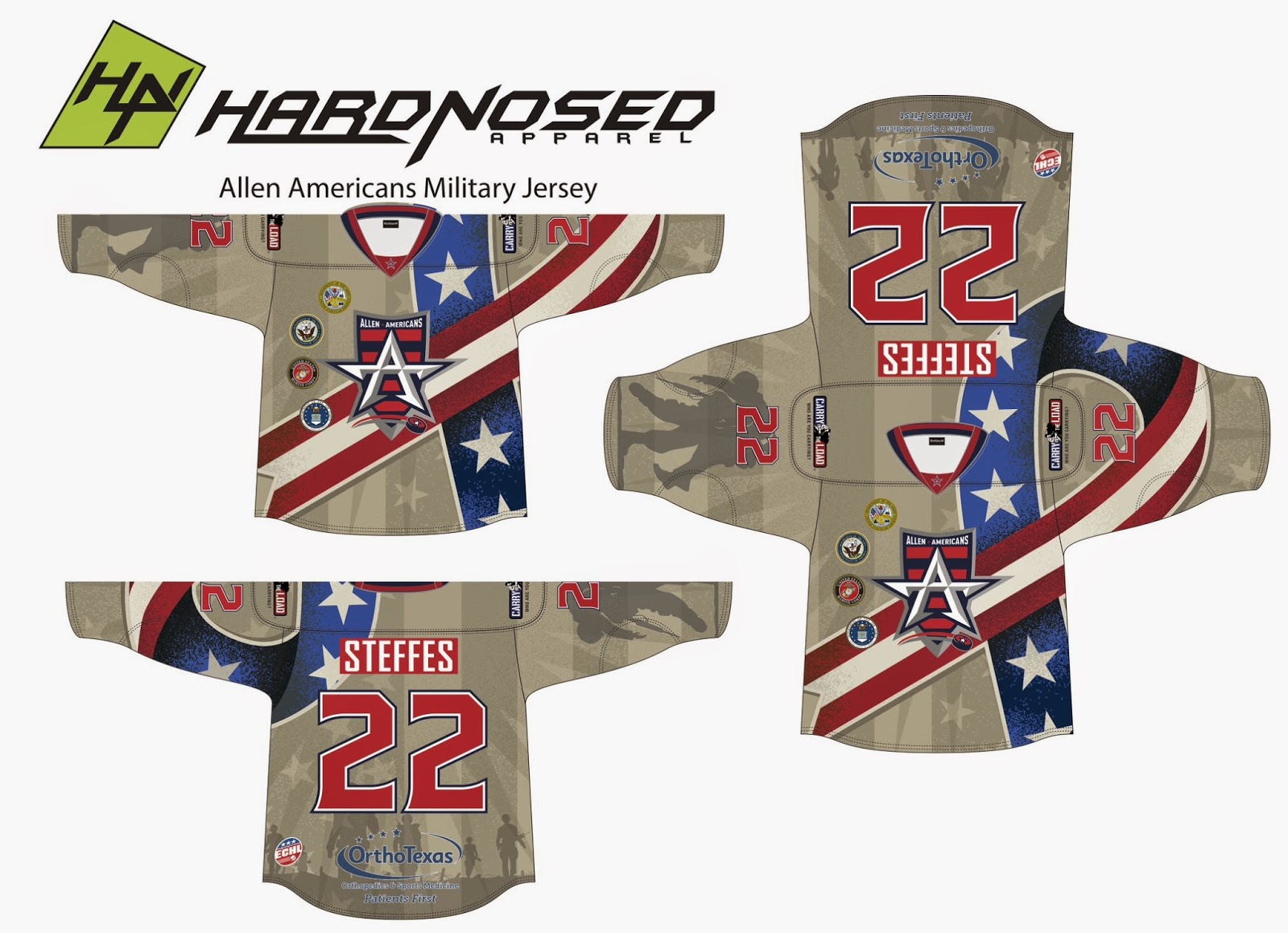 – Have had numerous questions about the dates for the first playoff games in Allen. The Allen Event Center (AEC) has several events scheduled in April that makes it difficult to pin down playoff dates. It is important to start the playoffs at home so starting on the road is not a viable option. The league rule is the playoffs cannot start before April 15 so special permission would have to be received from the ECHL and PHPA to start the playoffs earlier than the 15th. April 15th is an open date at the AEC so that date is certain but pinning down the second date has been a challenge. I know the team is working hard to get the dates firmed up and publicized so there should be an announcement any day.

– Also heard the first draft of the schedule for next season has already been provided to all ECHL teams. Still a lot of work to be done before the schedule is finalized but it will be out much earlier than it ever was in the CHL. Best estimate is the final schedule will be available sometime in May.

– If you did not see it on the transaction list Garrett Klotz was claimed by the Wichita Thunder on Tuesday. Should make the last two games the Americans play in Wichita (April 1st & 11th) interesting.

DID YOU KNOW: With 64 games played in the 2014-2015 season this Allen team has already set single season records for almost every offensive category. There are two categories however that have not been broken. Spencer Asuchak still holds the single season record for shorthanded goals at five which he set last year and Bruce Graham still has the record for the most game winning goals at nine which he set in 2009-2010.