ALLEN, TX – The Allen Americans beat the Kansas City Mavericks last night 3-2 before a crowd of 4226 at Silverstein Eye Centers Arena. The more you watch this team, the more you appreciate their success. The Americans have won five of their last six games with a cobbled together line up, that was the case again last night.

Bryan Moore was called up to San Jose earlier in the week, but Allen got Olivier Archambault back in return, but he did not play because of an injury. He is day to day. Goalie Stephon Williams, who was going to start in goal, was injured in warmups, so Jeremy Brodeur got the last-minute start. Allen’s 42-year-old bus driver, Kevin St. Pierre, who was a pro goalie for many years, got off the bus and filled in as the EBUG (emergency backup goalie). Marcus Basara, who was sitting at home and just signed by Allen, hasn’t played in two weeks was in the lineup. Peter MacArthur and Vincent Arseneau were playing for the first time in two weeks. The Americans ended up playing with only nine forwards and an extra defenseman.

– Allen didn’t have a single power play (Mavericks had two), they were outshot in all three periods for a game total of 42-23 and they didn’t score the first goal of the game. Thanks to some great goaltending by Brodeur and tenacity from the entire team the Americans found a way to win.

– Goal scorers for Allen were Peter MacArthur (5), Alex Schoenborn (3) and Mathieu Aubin (4). MacArthur picked up his own rebound to score, Schoenborn batted in a puck out of midair for his goal and Aubin’s goal came on a great cross-ice pass from Schoenborn.

– It was great to get the win tonight. The first period shots were 16-4 for them but we had many opportunities and missed the net a lot.

– We got solid goaltending from Brodeur which we needed since we allowed 42 shots.

– I don’t know why a penalty wasn’t called on their second goal at the end of the game.

– Here is a replay of the Mavericks second goal that Martinson was referring to in his postgame comments. It sure looks like interference as the Mavericks #34 (Hunter Smith) bull rushes Spencer Asuchak to clear a lane for a shot from the point. Interference is defined as when a player uses his body to “pick” or “block” to impede the progress of an opponent (non-puck carrier) with no effort to play the puck. As Martinson often says, it is easier to complain when you win the game. You can judge for yourself. 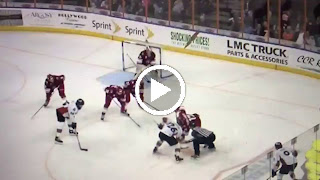 – Schoenborn was selected as the #2 star of the game with a goal and an assist. He made a great play on his goal knocking the puck in the net out of midair. Alex had gone 11 games without a goal and if you watched the game, you saw him grab the monkey off his back and toss it away. Schoenborn’s goal was great but his assist on Aubin’s goal was even better. He came up the left side of the ice and threaded a perfect through two defenders right on Aubin’s stick. Aubin finished the play putting the puck in the back of the net.

– I know the three stars of the game aren’t important especially when the team is on the road but I want to award a special star to Mathieu Aubin for his performance last night. Hard to believe you could be involved in all three of your team’s goals in a 3-2 victory, have a goal and two assists, have the game winning goal and be a +2 and not get one of the stars of the game.

– Hats off to Mike Gunn who stood up for his new teammate (Marcus Basara) after he was driven into the boards by the Mavericks Eric Freschi. Mike took exception to the check (no penalty was called) and made Freschi pay. Gunn was given an instigator penalty as well as a five minute major for fighting. Freschi was given a five minute major for fighting and a game misconduct under rule 23.9. I looked up this rule and it covers a myriad of situations one of which is spitting on or at an opponent or spectator. I went back and looked at the replay and sure enough you can see Freschi spit at Mike Gunn.

– The only other Mountain Division team in action yesterday was Wichita who lost to Kalamazoo 3-2. Wichita has lost their last two games and fallen to second place in the standings behind a hot Colorado Eagles team who is 9-0-1-0 in their last 10 games. Allen has the second best record in the division over the last 10 games (7-2-0-1).

– The Americans and Mavericks square off again tonight (7:05 pm CST) in the only game scheduled in the ECHL.

– Allen will be tempting fate if they don’t improve their performance in the game tonight. The Americans record when being out shot by their opponent is 5-4-1-1. Last night Kansas City had 19 more shots on goal than Allen. The Americans will have to close the gap between shots taken and shots allowed if they expect to win tonight.

– Special teams were a non factor last night as referee Mike Sheehan called very few penalties. There will be a different referee tonight and you can expect a different type of game with more power play opportunities. If Allen can score first and win the special teams battle they will win the game.